Downtown Des Moines has grown into a business and cultural center that consistently receives national attention. In 2014, Fortune named Des Moines the #1 city with an up-and-coming downtown and Politico wrote an in-depth report on how Des Moines went from “dull” to “cool.” Des Moines is attracting a broad spectrum of people because the city holds something for just about everyone, which the city’s many recent national media mentions illustrate.

Downtown is the heart of Des Moines. It’s where business thrives alongside a flourishing cultural and social scene. As housing opportunities expand in downtown, more and more Iowans are choosing to make their homes here – and for good reason. Here are just a few:

Who needs rush hour traffic? Downtown Des Moines is easily navigated on foot or by bike, so your daily commute can not only be healthly but also relaxing. You can also walk or bike to the Downtown Farmers’ Market (which The Daily Meal named America’s second-best farmers’ market!).

Living downtown greatly reduces the need for a car (and the payments, maintenance, fuel, and parking costs that come with it). Many urban dwellers also find that they don’t need as much square footage in their homes because the wealth of nearby amenities lets them treat the city, to an extent, as their living room. Additionally, many of the newer downtown apartment communities are incorporating many appealing amenities on site, essentially extending residents’ living space into the communal areas.

Downtown Des Moines is experiencing a cultural boom. Once regarded primarily as a business center for the insurance industry, downtown Des Moines is now being touted as a hipster haven, and world-renowned musician David Byrne (of Talking Heads fame) has sung its praises. Of the Des Moines Social Club, housed in downtown Des Moines’ renovated art deco firehouse, Byrne said,
I think what’s happening here is hugely encouraging…. It makes things possible: performances, exhibitions and all that, which can provide an essential venue for all the creative folks around here—and their audiences. But it’s also what it says, a social place where folks can come in contact with people they never ordinarily would meet. Worlds in collision.

Western Gateway Park serves as another important cultural center for the city. Each year, the 80/35 festival draws indie and rock musicians such as Wilco, Cake, Weezer, David Byrne, and the Wu-Tang Clan. It’s also the location of the Des Moines Arts Festival, winner of the International Festivals & Events Association’s Golden Pinnacle Award for best festival, and it’s adjacent to the stunning Pappajohn Sculpture Park.

For Great Food and Nightlife

Award-winning martinis at The Lift, locally sourced shared plates and craft cocktails at RoCA, attitude-free French delectables at Django, and inventive Latin American cuisine at  Malo are just a few of the abundant choices in the downtown neighborhood. If you’re in a more casual mood, you can enjoy an undead-themed burger at Zombie Burger + Drink Lab or kick back with the local crowd at The Royal Mile. The choice is yours.

Hubbell Realty is proud to make living downtown a possibility for more and more Iowans. We offer a wide range of downtown options to suit many budgets, lifestyles, and tastes; and we can’t wait to share more about what options will be available at Gray’s Station.

This year, the downtown landscape will undergo even more changes than witnessed in years past.

The biggest change people are bound to notice is at Gray’s Station.

On January 2, Hubbell Realty Company started construction on the Gray’s Station pedestrian bridge, crossing over the Raccoon River. The bridge will connect to downtown Des Moines, the existing trails along Gray’s Lake and will also lead to the brand-new Water Works Park tunnel connection. The bridge design mimics the current Gray’s Lake bridge with colorful up lighting at dusk and will have handicap accessibility features. The work is expected to continue until mid-summer when the bridge will officially open.

We will also continue the bike trail to the north, winding throughout the Gray’s Station neighborhood until reaching MLK Jr. Parkway. The trail will flow past the City of Des Moines’ wetland basin project that will serve two purposes:

Both are expected to be finished in 2019.

The Linc apartments, as well as the first phase of Gray’s Station townhomes will begin construction the spring and extend into early 2020. Linc will feature a community pool, dog park, modern apartments and a food hall along MLK. This phase will feature 11 for-sale townhome varieties including different floor plans and interior choices from Hubbell’s Downtown Design Studio, which will open later this year.

The East Village continues to erupt with new breweries, pop-up storefronts and additional housing. That also rings true for the Bridge District to the north, which will continue with its popular townhome concept, The Banks. In addition to Verve and Velocity, the neighborhood is adding a third apartment community to the north overlooking the Botanical Garden and Des Moines River.

Another noticeable effort going on along, and in, the rivers is the Water Trails and Greenways Master Plan. In October 2018, our company announced a donation of $1 million over the course of five years to the project. The Water Trails effort aims at mitigating and transforming the three downtown dams into safer and more recreational water features for kayaking, whitewater rafting and even surfing. The plan also includes adding 80+ water entry features around Central Iowa in more than 15 communities in addition to creating water monitoring systems and addressing safety and water quality initiatives.

Also along the river is the Des Moines Skatepark. This park will feature a 65,000-square-foot skatepark, pedestrian walk, main plaza as well as an interactive and “skateable” sculpture reading WOW, all overlooking the riverfront.

The face of downtown Des Moines is ever changing and the possible construction of the two towers over the course of the next half a decade will change the skyline even more.

Gray’s Station is Des Moines’ newest neighborhood, bringing 75 acres of living, recreation and commerce into downtown Des Moines. With three phases of development scheduled for the next 10 to 15 years, this community will continue to transform the face of downtown Des Moines for the foreseeable future.

The first project underway is the highly anticipated Gray’s Station bridge, which will connect downtown Des Moines to Gray’s Lake, including the tunnel at Water Works Park. The pedestrian bridge and trail system are both being constructed by Hubbell and are anticipated to be open to the public in late summer.

Meanwhile, the City of Des Moines is reconstructing the wetland park system that runs along the southern portion of Gray’s Station. This system will serve as a water filtration center as well as an educational focal point within the Gray’s Station community. It’s anticipated to have outdoor seating, floating pathways and educational plaques focusing on natural habitats and native plant species.

Phase I of Gray’s Station also includes Linc, an apartment community, and for-sale townhomes covering roughly 17 acres of the development. These communities will extend from MLK Jr. Parkway south to the wetland park system and bike trail.

Linc, currently under construction, will feature two buildings and 200+ apartment homes with varying floorplans, pricing and features. In many cases, units will have high-end finishes, views of downtown and a new concept: an additional den space to use as a work-from-home office, guest room or anything residents want! Linc will also have amenities such as: dog park, clubhouse and pool, fitness center, community rooms, food hall and storefront boutiques.

The biggest change Hubbell is bringing with Gray’s Station is the option to own a home in downtown Des Moines. In the first phase, Gray’s Station will offer 11 townhome plan varieties and a condominium building with various floorplans, finish options and price points. The townhomes will range from roughly 1,500 to 3,000 square feet and will have views of downtown Des Moines. The first homes are expected to start in the $300,000 range and extend up to nearly $1 million for a top-floor condo.

Overall, the Gray’s Station neighborhood will be very walkable and connected to various neighborhoods and districts within Des Moines. The community will feature a number of pocket parks, green spaces and bike-friendly lanes, perfect for people who love experiencing outdoors without giving up the convenient location.

Look for more information on Gray’s Station as we continue to build Phase I and enter into Phase II and III in years to come. 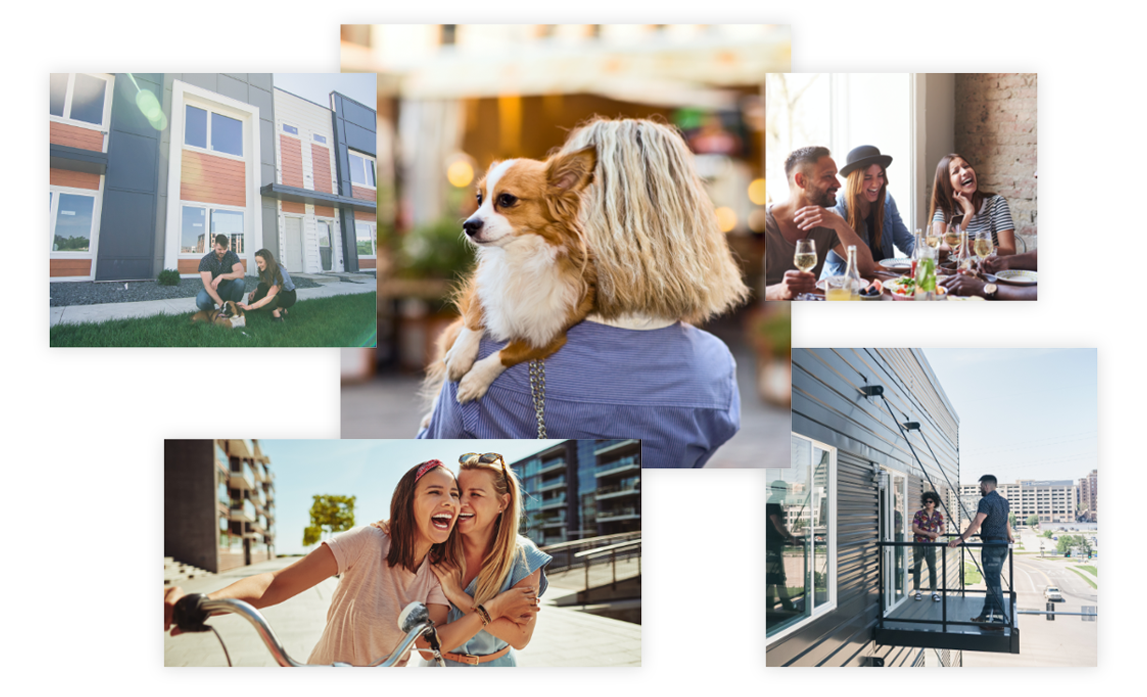 Whether you’re a retiree or a millennial, there’s a spot for you in Des Moines.

Des Moines is one of the best festival cities in the world, according to the International Festivals & Events Association.  I dare you to lend your ears to 80/35, your taste buds to anything deep-fried-on-a-stick at the Iowa State Fair or your eyes to Des Moines Arts Festival for a summer and tell us differently.

Our nightlife, craft brewery and restaurant scenes bring the best of farm-to-table and entrepreneurship to light.

Where do you get all the money to experience these fun things? Well, it might come from how affordable it is to live in Des Moines.

Des Moines has been named  #3 for Best Affordable Places to live in the U.S. in 2018. That’s something everyone can boast. From downtown apartments to for-sale townhomes, there are endless options for people of any age and stage in life. Apartments are catering more to residents’ needs with amenities such as dog parks, bike storage and full-service gyms. Rental or for-sale townhomes are also increasing in downtown Des Moines, especially along the Des Moines River in the East Village.

Iowa’s the obvious next step if having a family is in your future. From steady jobs to  affordable homes, Iowa has also been ranked among the  top places to raise children.

On top of being a great place to live, Iowa’s capital also has a thriving work environment. Midwesterners are hard workers at heart, so prepare to compete and excel. Forbes named Des Moines  a top contender for the best places for business and careers, trailing only Portland, Raleigh, Seattle, and Denver.

Unlike those cities, there’s a low chance you’ll be running late due to traffic. Des Moines has one of the least stressful commutes in the nation – averaging almost 10 minutes less road-time than other cities. However, if you live and work downtown, chances are you can walk, bike or take downtown Des Moines’ well-known sky-walk system to your office.

Hubbell Apartment Living and Hubbell Homes offer countless places to live in downtown Des Moines and around the metro area.

No comments to show.